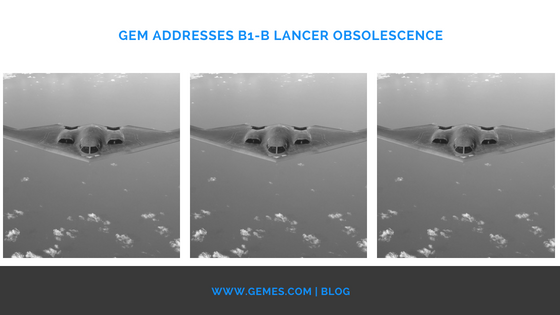 The B1-B is considered the backbone bomber for the Air Force. It is a long-range, multi-role, heavy bomber aircraft, that happens to carry the largest payload of both guided and unguided munitions in the entire US Air Force inventory. Nicknamed “The Bone” it has been in service now for over thirty years (first delivery in 1985) and is ex-pected to continue flying well into the 2030s and beyond. Like many planes developed in the 70s and 80s that are still flying today, the B1-B faces ongoing microcircuit obsolescence challenges within their avionics and radar systems. This is where the GEM program can help.

There are over 140 GEM NSN replacement microcircuits used on B1-B in a variety of different circuit card assemblies (CCAs) and line replaceable units (LRUs). One of our more notable success stories involves Emulating a replacement solution for a 54LS193 IC used on the Cover Pulse Generator Circuit Card Assembly. This was a supply issue that had plagued the Air Force B1-B EW Depot repair facility for several years. The CCA in question contained eight 54LS193 ICs, and the next higher assembly LRU used ~twelve CCAs. Starting with a M38510/31508 specification and sample units, we reverse engineered the parts to gain a full understanding of the application and specification. There were differences in the Generic device performance depending on who the manufacturer was.

Next we designed and manufactured QML production ICs which satisfied the programs requirements. The benefit to the program was that we offered sustainment support without a system redesign. The Air Force estimated a $4.4M cost avoidance. Support for B1-B is ongoing. Just this year we designed and delivered replacement units to a customer source control drawing that will be used on a circuit card located in the RSVP (radar video signal processor) LRU on the B1-B radar. Contact us to see how we may help you (geminfo@sri.com).