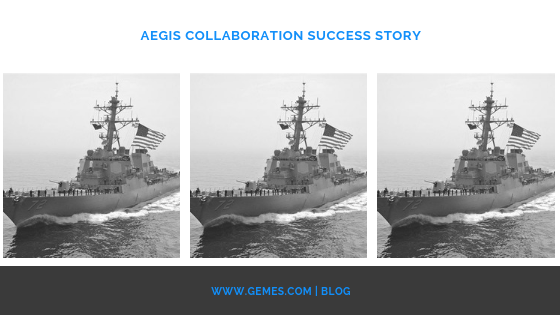 This microcircuit, a SG5470 dual peripheral driver, was initially manufactured by Silicon General, who was acquired by Linfinity, and subsequently by Microsemi, who discontinued the part in 2006. Fortunately, Raytheon was able to satisfy program demand requirements through the years by using residual inventory available through Aftermarket suppliers. Eventually, the Aegis demand outstripped supply.

All proposal requests start with a technical review of the microcircuit specification, i.e., a standard military drawing, slash sheet, source control drawing (SCD), etc. Raytheon submitted an SCD and request for quote to SRI. The SRI technical team reviewed the spec and GEM technologies for compatibility. The GEM program maintains several gate arrays (or base arrays) that have been developed to address a variety of microcircuit applications. This particular microcircuit driver had an unusual combination of +5V TTL logic, but also included high power transistors with high voltage requirements. One base array example is a 1.5 μm BiCMOS array which has output drivers capable of 100 V breakdown voltages (Figure 1). This was the best candidate to target for design.

After a thorough review of the SCD it was determined that every electrical & mechanical parameter could be met with two exceptions:

Engineers from Raytheon and SRI held several teleconferences to discuss performance requirements and device applications. Raytheon determined that these changes would most likely not be an issue for the intended applications but opted to complete insertion testing to verify this.

Having agreement on the specification waiver, the bid was sent to DLA for funding consideration and price approval. GEM went under contract to supply prototypes of the design for insertion testing with the GEM program picking up all of the non-recurring engineering costs (NRE) .

Typically, if DLA finds that the obsolete microcircuit is used in multiple weapons systems, or that there would be benefits to the GEM program, they will often fund the development of the GEM circuit.

This was the case here.

This device specification was unique in that not only was full QML group testing required, but each part had to undergo a lamp driver test on all packaged parts. Specific design test boards needed to be developed as part of the required screening process.

Ten prototypes were delivered to Raytheon to complete insertion testing. Over a two-month period Raytheon tested the prototypes in six different applications, each passed with flying colors.

Following the successful insertion testing, SRI received a purchase order to deliver production units. These were delivered two months a head of schedule. Year to date, over 2000 units have been delivered. As a result of the synergy between Raytheon, DLA, and SRI, a support contract was able to be fulfilled for the Navy without a costly redesign.

The Emulation program provides the Aegis Weapons Systems with an inexhaustible supply of driver units that can support the program well into the future.